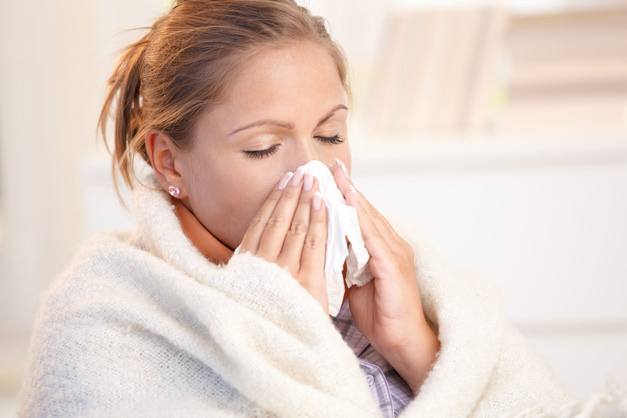 Colds are much more common in winter and autumn time when the air is dry and cold. However, it doesn’t mean that the common cold is restricted to a single season. It can happen anytime and can mess up your plans real fast. Having a stuffy nose really puts a damper on most plans and no matter how much coffee and herbal tea you consume, there are instances when nothing seems to work for your cold and flu. There is a reason for that!

Not all coughing, sneezing, runny noses or stuffy heads means that you have a common cold. Sometimes it is so much more than that. Winter can be hard on our immune systems and after that we are thrown directly into the allergy season. Sometimes, it is easy to get confused and to differentiate between a common cold, sinus infection, allergies or the flu. The primary reason for that is the similarity in symptoms.

However, if you know what you are looking for, there are certain differences that can help you identify which type of malady you are affected with.

Identify If Your Condition Is Just a Common Cold or Not

Coughing and sneezing usually mean that you have a cold. The most common symptom of a cold is a sore throat, which generally lasts for a couple of days. This is followed by other irritable symptoms such as sneezing, congestion and runny noses which also last for a couple of days. On the fourth or fifth day, a cough develops, which if not treated can become persistent. By the end of the week, the symptoms starts improving and the condition comes to an end by the end of two weeks. Some symptoms of cold solve themselves and don’t require any external assistance from medical professionals. However, if a fever develops in addition to a cold, consulting a doctor is your best bet.

Can It Be Flu?

Flu or Influenza was a horror story before the advent of modern medicine and had the power to raze down cities to the ground. Now that we are free from the constraints of medieval times, it is quite easy to identify and treat flu. Flu is similar to the cold in regards that it also develops all of a sudden and patients can experience coughing, sneezing, headache, muscle ache, head congestion or chest congestion and pain in joints. Generally, flu symptoms are harsher than cold symptoms. A fever up to 102 degrees is quite common in flu and some patients can also experience fatigues, lethargy, vision impairment and muscle aches. It can last for about a week or two, after which it will gradually start improving. However, be prepared to let the virus run it whole course during which fatigue can be felt.

Are You Coughing Because Of Allergies?

Allergies sometimes have similar symptoms as that of flu and cold, such as sneezing, coughing, a sore throat and a runny nose. However, additional symptoms include watery eyes, itchiness and irritation which can persist for a week or two after which it will dissipate automatically or for as long as you are exposed to the substance that you are allergic to.

Is It Sinus Infection?

Sinus infection can be caused by bacteria and viruses when your nose fails to drain properly. This means that your sinuses are retaining liquid and when they are unable to drain, they become the ideal breeding ground for bacteria and viruses. The symptoms of a sinus infection are stuffy nose, pressure behind eyes, forehead, or cheeks, a persistent headache, and a fever.

If you are still confused and are unable to identify what your symptoms mean, contact us today and talk to our expert medical professionals who can best guide you on the subject.